A Leicester founder says that he is reassured that the entrepreneurial community is seeing the potential of black founders and believes making the startup sector more inclusive will only benefit companies and consumers.

Fares Abida, the founder Vybe Music, commented following the release of the first ever ever qualitative report on black startup founders.

Entitled ‘The Black Report’, the study by 10×10 and Google looked at 60 pre-seed black founders. It covered where founders grew up, with whom, their academic backgrounds, their business sectors, how and who funded their businesses, and the racial, sexual and gender makeup of the startups, their teams, and investors.

Here are the reports key findings:

22% raised from finance from friends and family

46% are founded by women

The CEO of Leicester based Vybe Music- a music sharing platform- Fares Abida is a solopreneur himself. He said:

“Since I have met people like Andy, Ashleigh, and Dion from Colorintech, I can definitely see the impact their work has had on the type of opportunity and knowledge I have acquired throughout my journey. It was reassuring to see that people are actually seeing the potential of my community and that we have as much talent to offer as anyone else and that making the industry more inclusive could only benefit companies and consumers.” 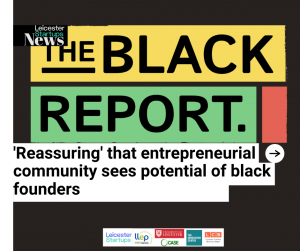