The founder of a Leicester startup says he aims to “solve bicycle theft” with his innovative new bike rack and accompanying app.

He came up with the idea after having his bike stolen on his very first day in the UK.

According to 2015 data, 376,000 bicycles are stolen every year in the UK. This works out at about one bike stolen every 90 seconds. The website Stolen Bikes UK says this leads to a quarter of riders giving up riding altogether.

Uni Cycle Solutions hopes to help tackle this by having councils, universities and large corporations installing its ‘Smart Racks’ in their towns and cities. Cyclists park up at the racks, open up the accompanying app and secure their bikes using their phones.

The company has been hosted at the Innovation Hub, nominated for an innovation award and the team is now looking for their first customers. 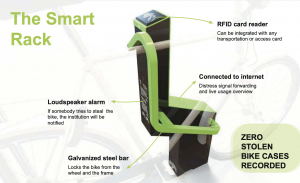