VC investment in the East Midlands up almost 300%

The East Midlands tech sector attracted more than $93million in 2020, according to the latest Tech Nation report.

Investment in the region is up by almost 300% from the previous year and is the biggest backing of East Midlands businesses since 2017 ($150.39million).

In total $396.32million has been invested in Leicester, Nottingham and Derby’s tech sector in the last five years.

It comes as the UK as a whole hit a record high for attracting tech VC investment.

According to the report, VC investment in Leicester (city) firms came in at £1million and the one ‘unicorn’ in the whole of the East Midlands is based in Loughborough (The Access Group).

In the foreward of the report Prime Minister Boris Johnson wrote:

“Unicorns now roam the streets of cities across England, Scotland and Wales. This isn’t just great news for the entrepreneurs and thinkers and do-ers who make the British tech industry what it is. As the sector grows and grows it contributes more and more to our economy, a silicon supercharge that benefits us all.”

“The UK’s tech success is the result of foresight, drive and dynamism. The strong and growing tech ecosystem we have nurtured over the years is delivering stellar results. I believe that this is just the beginning of what the UK can achieve.”

You can read the whole report by visiting: https://technation.io/report2021/#uk-tech-investment 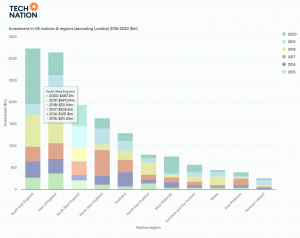